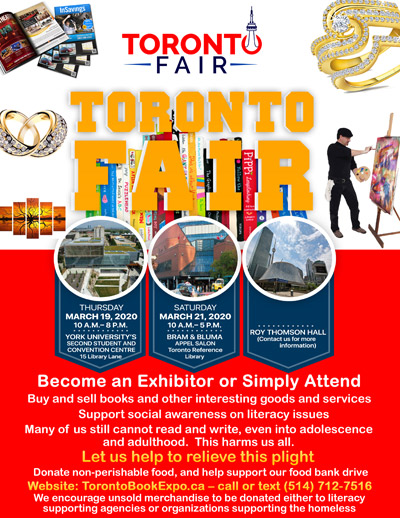 Toronto Fair seeks to bring together the idea of the community fair which is still prevalent in the towns and villages which surround Toronto with an "urban flavour".

We seek to provide venue for sellers to offer innovative and interesting good and services to potential buyers who seek to search out for a range of goods and services which they may be having trouble finding. Toronto is a big city with many great small businesses and entrepreneurs who often cannot afford the very high cost of rent of shopping mall and other storefront locations. And even if you have a storefront, you might also seek to boost your marketing reach.

The local fair has historically been a site for trade, celebrating community identity, and welcoming outsiders to a town or village. Fairs usually had a dual purpose of business and pleasure, and were a key festive celebration in the local calendar. They were often held in autumn, just after the harvest, or in spring, when travel became easier after winter.

It is often difficult to know exactly when a fair began, as many started informally, growing around places of worship and the timing of religious festivals that would draw large crowds.

Fairs largely became recreational events around the 1830s, as the rise of the railways changed how goods were moved around the country and fixed shops became well established.

The Toronto Fair is a not-for-profit initiative of the Toronto Book Expo.